New York City rates as one of the world's top art meccas. With diverse ethnic areas of New York from the five boroughs to outlying suburbs, various art styles and artists abound in this largest city in the United States. Local museums, art shows, and art festivals boost many artistic selections, making this city of over 8 million people a prime location for eclectic art styles. Art genres run the gamut from pop art, to art deco, to modern art and even to graffiti art. A top graffiti artist who has recently taken New York by storm is Banksy. Now Banksy's art in New York City seems to be all the rage. However, who is this artist and what is so unique about his artwork? 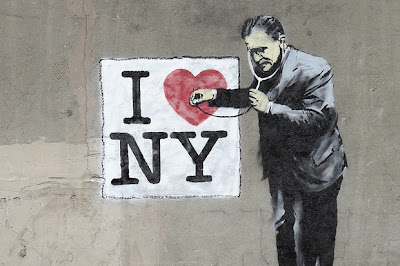 For years, people have been trying to figure out exactly who Banksy is. At first, he began his art career opting to be anonymous. Nothing is more intriguing, especially in the art word, than an artist who is an enigma. When a curious researcher or art aficionado thinks they have narrowed down the possibilities of who Banksy exactly is, they discover that they were either wrong or are on the wrong track. As the years go by, more is known about this creative artist, who grants few interviews and prefers it that way. Simon Hattenstone of the Guardian, an England publication, has been one of the few journalists to be granted an interview with Banksy. It seems that he maintains the anonymity partly due to the need to concentrate on his artistic talent and perhaps, also, to keep the mystery alive to increase interest in his art. What is now known about Bansky are some basic facts about his early beginnings.

Banksy was born in Bristol, England in 1974. He began his professional career as a butcher but quickly became caught up in the Bristol underground art scene and began creating graffiti art. He soon discovered that the use of stencils added a unique creative touch to what some were labeling subversive or punk street art. Gradually, his art style and popularity began to spread through Britain and later to other areas of Europe. Within a few years, his art has become known worldwide. As more is known about this British artist, some are claiming his notoriety has gone from anonymous to quasi anonymous.

As mentioned previously, Banksy's art style is categorized as graffiti art. Other names used for his art include street art, modern art, pop art or satirical street art. His graffiti art goes further than merely writing on walls and extends to using stencils to create unique, sometimes almost 3D effects in his pieces. Although his art quickly expanded from wall paintings to more traditional canvas art, he is still known for his impromptu artwork that often show up on walls and buildings in the Bristol and London area. Many of his art pieces make political or societal statements, with some being blatant while others less so. Certain objects or subjects make repeated appearances in Banksy's artwork, including rats and boys. He also has dabbled in art structures and statues.

Recently, Banksys artwork has shown up on the West Bank of Palestine. Some in the area are calling his artwork terrorist political art. Nine paintings have recently been discovered on the walls that separate the area from Israel. Many locals state they do not like his political statements painted on the walls, while others state it adds a bit of creativity to the otherwise boring structure. Banksy recorded a statement concerning his artwork on the wall, but as usual, he did now show his face.

With his art showing up around the world, it was only a matter of time before Banksys work began to show up in the United States mecca for artwork -- New York City.

Banksy's art began to appear in New York City on walls, buildings, and subways years before the first United States tour of his artwork. The artist's work toured the United States during the spring of 2010, making a stop in New York during that May. Although the artist himself was never interviewed nor seen, there was an overnight street mural showing that he indeed had been in New York City. Local artists and newspapers noted that an I Love New York banner, complete with a doctor checking for New York's heartbeat, was painted on Cedar Street between Greenwich and Trinity. Since his first artwork appeared in New York years ago, others have claimed to see random graffiti credited to Banksy's creativity. Often, people take random pictures of the work, only to find it gone in a few weeks. Other works remain, in part due to his ever-increasing popularity. One such work in New York City can be seen at the corner of Grand and Wooster. There is nothing like a rat wearing an I Love New York t-shirt while creating his own artwork in crayon. It is apparent from the painting that Banksy's rat doesn't have the same knack for artwork that his creator has! He even promoted his movie by tagging the dumbo section in Brooklyn NY with a cunning stencil work. 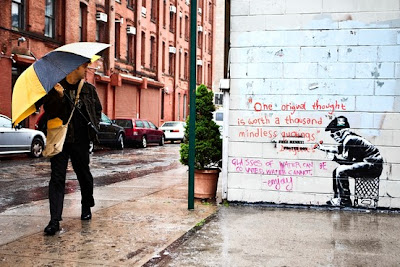 Banksy's art is now known through most of the civilized world. Canvas and framed prints of his work are showing up in homes and offices everywhere. However, experts suggest ensuring that the work is indeed approved and not merely copycat products.

About the only thing left to know about this graffiti modern artist is his true identity. Who is the true man behind the graffiti art? Until we find out, enjoying Banksy art in New York City and elsewhere will have to fill our ever inquisitive minds.
Posted by Unknown at 5:14 PM